Thank you for the opportunity to speak. As I look around this room, I see a lot of smart people. That is one thing I learned at Randolph: I will not always be the smartest person in the room. I have thought a lot about what I wanted to say, or what I should say. I decided it would be better to keep it simple. There won’t be any big words. There might be a run-on sentence or two, but hopefully I can pass along a clear message as to what it meant for me to be a Randolph student, and what it means to me today as an alumnus.

The first word that came to mind about what Randolph means to me is community. Randolph is an amazing place that prepares young people for college and the “real world”. Everyone in this room, through your commitment to teaching, coaching, and mentoring, is responsible for impacting a student’s life. It wasn’t the specific curriculum, the historical dates, any one book I read, an early morning workout, or the colors I chose to paint with in art class that I remember. The foundation of what all these things combined taught me is what has stuck with me to this day. 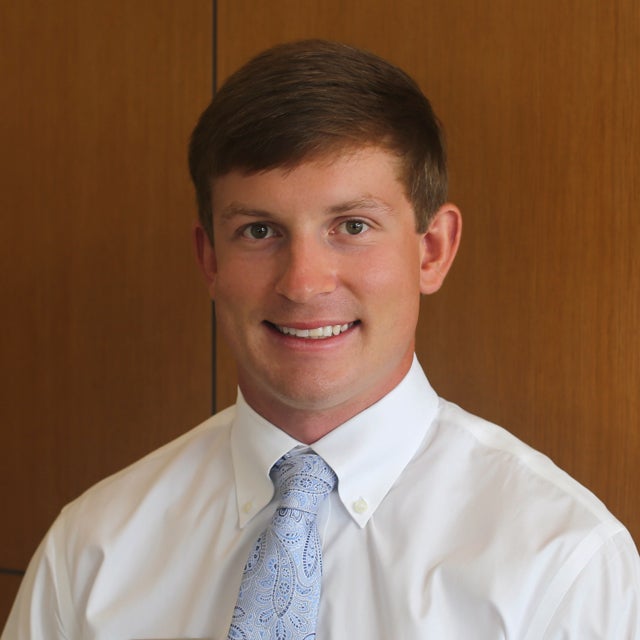 "While I was in school, some things seemed repetitive and boring, like busy work. I questioned why certain teachers made us do certain things. In reality, at the time, I didn’t see those projects as the bricks that would prepare me for my future."

The things that last are the fundamentals of what you all teach, from kindergarten to senior year, that propel a student to success. It was once said, “Rome was not built in a day, but rather brick by brick.” I know for me, just like most, instant gratification makes it hard to be patient. But when you really have to work for something, and you can see your progress over time, push through challenges, make yourself do the things you don’t want to do, get up after you get knocked down, and learn from your mistakes, that is when you can look back and know you have created something really special. Try telling that to a bunch of students ... especially the ones who count down the minutes until the next break! I know that was me. Sometimes, the school of hard knocks, trial, and error is the best way to learn. If you can get your students to hear you (they will, even if it doesn’t seem like it), a situation will arise in which they will think of you and say, “That’s what they were talking about,” and it will click.

Will Smith tells a story about how his dad owned a shop, and right out front was a huge wall. One day, he decided he wanted a new brick wall, so he knocked down the existing wall and had Will and his younger brother build a new one. Will says he is going to build the biggest, baddest, best brick wall. But he figures out that, no, you can’t go out there and just build the best brick wall; you have to do it by laying the brick in your hand in the best possible way that a brick can be laid, and then lay the next brick in the best possible way. Eventually, you have the best brick wall. Will goes on to say that it took him and his brother a year and a half to complete the wall. That experience was instrumental to him and to the way he divided projects and big tasks into small goals that can be tackled one brick at a time.

While I was in school, some things seemed repetitive and boring, like busy work. I questioned why certain teachers made us do certain things. I would say, “This is stupid. Why do we have to do this?” I had a bad attitude. In reality, at the time, I didn’t see those stupid, repetitive, busy work projects as the bricks that would prepare me for my future. I’d just go see Coach Gaunt and take my aggression out in the weight room or on the football field. This was a great balance for me. It wasn’t until my freshman year of college that I had a fraternity brother complain about how college was so hard, and he didn’t know how to study for any of his tests. I was thankful Randolph had prepared me. I went back to my room and thought, “Wow, freshman year is easier here than sophomore year at Randolph.”

"Randolph opens up the possibilities for students to learn, not just for the time that they are here, but so they can continually learn, and most importantly, believe in themselves."

Randolph opens up the possibilities for students to learn, not just for the time that they are here, but so they can continually learn, and most importantly, believe in themselves. It is a safe place to fall, a safe place to learn from failures, and a safe place to stand back up again. I know it happened to me. During my junior year of high school, I got sent to the honor council for cheating on a Latin test. You can only imagine the emotions from a hormonal high schooler. I didn’t think it was fair. Today, I have no excuses for that. I was lazy. But it ended up being one of the best things that happened to me, because I learned that I was only cheating myself. I can’t rely on how somebody else studies; I can’t rely on the possibility that they studied more than me, or that they know the material better than me (especially in college, when you really don’t know who you’re sitting next to). I learned I can only count on myself. Since that day, I quit looking for shortcuts. I learned that if I would put in the time to do things the right way instead of spending my time looking for shortcuts or coming up with creative ways to sneak a few answers in, I would have studied enough to actually know the material! This is a lesson that has stayed with me to this day. Those who hold you accountable can thank you for that accountability and the self-discipline to do things the right way.

That self-discipline is what I believe I can contribute to some of my success from college, my career, finances, and my marriage. As the General Manager of Acura, I am responsible for holding people accountable, and I know that I can only hold them accountable if I hold myself accountable too. Without that, I would not have respect from my coworkers. Without respect in the workplace, we would not be able to set aggressive goals that will propel us to the next level. Randolph has also taught me to be a hard worker, to be a man of my word, and to commit fully to the things I say I’m going to do. When you can hold yourself accountable to doing the things you said you wanted to do, long after the feelings that made you say them have left, it is inevitable that you will reach your goals. So far this year, at my store, we have already reached our annual goal. Now we want to double it. By giving your students timelines and due dates, it sets up the foundation. I used to wait until the last minute to do projects; I would stay up all night to finish them. It wasn’t until college that I would go back to my room after being given an assignment and finish it two weeks early. I knew I had to do it, so I might as well finish it early so I wouldn’t be stressed, especially since I would have to do it either way. That freed up my schedule so I could accomplish more.

"I wasn’t the best student. I didn’t have the best grades and I didn’t always have the best attitude, but ultimately, I still learned! I learned that I might not be the smartest in the room, but I can put in the best effort."

I wasn’t the best student; I didn’t have the best grades, and I didn’t always have the best attitude toward my coursework, but ultimately, I still learned! I learned that I might not be the smartest in the room, but I sure can put in the best effort. Not only that, but I learned that I can learn from anybody and everybody. Randolph is a place where everyone is welcomed. The faculty is accommodating, tough when they need to be, and genuinely care for the students. Randolph is a place in which you can feel the commitment from the faculty and feel that it is better than anywhere else.

Randolph is a community that you are always a part of. Back in 2002, I didn’t know it at the time, but I met some of my lifelong friends here. I am part of a group of guys from Randolph that goes on an annual trip together. And even though we all live in different cities now, it’s like nothing has changed between us when we get together. Here I am, coming up on my 10-year reunion, still a part of this community. Any time I’m on campus, or I see a coach, teacher, or faculty member out in public, they still seem just as excited to see me as I am to see them. I met my wife JoAnna for the first time in Mrs. Cannon’s third grade class. Randolph is our community, and now we are married and expecting our first child in October.

In closing, I want to say thank you to each of you for the great things you do, the lessons you teach, and the time and effort you put into this job every day. Thank you for the opportunities you have given me and so many other students, former and present. Here’s to a great year, going above and beyond, staying positive when it’s hard, and to impacting students’ lives one brick at a time.